Queen Elizabeth II, a patron of the Holocaust Memorial Day Trust, visited the site of the Bergen-Belsen Concentration Camp in Germany to pay her respects. More than 50,000 perished at the NAZI camp including Anne Frank and her sister Margot. It is the first time Her Royal Highness has visited a concentration camp. She requested that the visit be added to her four day schedule during a tour of was accompanied by her husband Philip, Duke of Edinburgh.

Bergen Belsen was liberated in April 1945 by the British 11th Armoured Division. This year has seen the 70 anniversary of the liberation of the concentration and death camps, but as the number who liberated the camps falls, the importance of passing on memories and understanding of the true horror of this European genocide grows.

Rudi Oppenheimer, 83, was sent to the Bergen Belsen camp when he was just 12 years old with his brother Paul and sister Eva. All three survived, though their parents were murdered. He said: “I am lucky because I survived and I was able to put up a gravestone in my parents’ memory, but so many people didn’t survive and no-one remembers them.” He told the Daily Telegraph that he was “thrilled” by the Queen’s visit, adding: “She is the head of the Army, they liberated the camp and they looked after all the inmates. Some of the British soldiers died from typhus as a result and it is important for her to honour them.” 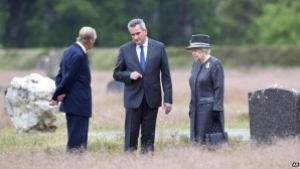 With so many thousands perishing at Bergen Belsen, bodies were piled and thrown into mass graves by bulldozers. It is impossible to mark the exact location of graves and many families have erected tombstones at the site. One such memorial is that of Anne Frank and her sister Margot Frank. The Queen and Duke of Edinburgh stopped at the memorial to talk to Mr Wagner before taking a reflective walk around the site.

“It must have been horrific,” The Queen said to navy pilot Captain Eric “Winkle” Brown, 96, from West Sussex, one of the first British officers to enter its gates on 15 April 1945.

“Utterly, utterly horrific,” he recalled later, with some 10,000 bodies just “littered around” and survivors “dehumanised”, urinating and defecating where they stood or lay. “They had lost all dignity, they were dying, none of them looked as if they would live,” he added in comments to The Guardian.

Throughout the year Holocaust Memorial Trust hold events to commemorate those lost in the Holocaust and educate people about what happened in one of Europe’s darkest times. Please visit our welcome page for more information about Holocaust memorial events in Bristol.